Immigrants and Refugees: A Faith Journey

Immigrants and Refugees: A Faith Journey
Scripture connections for September 27, 2020 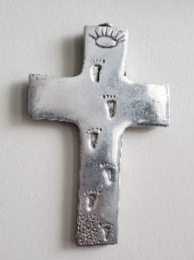 “Do nothing out of selfishness... rather, humbly regard others as more important than yourselves, each looking out not for his own interests, but also for those of others.” Philippians 2:3-4

Fr. Greg Boyle, SJ, founder of Homeboy Industries in Los Angeles, has been a guest speaker at Old St. Pat’s a number of times in the past few years, and his core message speaks to OSP’s vision of Radical Inclusivity: “There is no ‘us’ and ‘them,’  – only ‘us.’” Jesus worked to dissolve barriers between people and to teach this same idea: it’s just ‘us.’  We divide and separate so much in our society: we use race, gender, socio-economic status, ethnicity, citizenship... all of these are used to distinguish between ‘us’ and ‘them.’  So much of the animosity toward immigrants and asylum seekers in this country seems to come from a place of fear in regard to our own self-interest: “If all of them come over here, there won’t be enough (jobs, food, housing, medical care…) for us.”  St. Paul reminds us of Jesus’ radical inclusivity in the way we look out for the interests of others, and to avoid selfishness.  How might we do this better as individuals? As a country? As a Church?
“Are you envious because I am generous?
Thus, the last will be first, and the first will be last.” - Mt 20:16

Today’s Gospel tells a wonderful story about work and workers. Images of immigrant workers come to mind as we listen: groups of workers waiting to be hired, hard working people heading out to the field to do what others might avoid doing. The United States needs immigrant workers, especially as the ‘baby boomers’ retire and younger workers have fewer children to add to the workforce. Watch Our Future Together: How Immigrants Reshape Our Workforce (https://youtu.be/s89sC1RYl6k) to learn more about the importance of welcoming immigrants to our workforce. Then ask your representative to increase the number of work visas to allow more immigrants to help.

Immigrants and Refugees: A Faith Journey
Scripture connections for September 20, 2020

Immigrants and Refugees: A Faith Journey
Scripture connections for September 13, 2020

“Could anyone nourish anger against another and expect healing from the Lord?  Could anyone refuse mercy to another like himself, can he seek pardon for his own sins?” Sirach 28: 3-4

The topic of Immigration garners a lot of anger in our country, as is evident from so much of the political rhetoric we hear about jobs, walls, and ‘legal pathways.’  Some might respond to Sirach’s admonition with this rebuttal: “Immigrants are not like me – I’m a legal citizen. I belong here.” But what are they choosing not to see?  The human being who wants her children to grow up in safety? The human being who hopes to escape his life of poverty so that he can provide for his family?  The human being who hopes to live their life in peace, without fear?  That sounds like all of us.  Could anyone refuse mercy to another like himself, can he seek pardon for his own sins?

Immigrants and Refugees: A Faith Journey
Scripture connections for September 6, 2020

LOVE. What does Love look like to the immigrant and refugee?
In our country we separate parents from children, hold them in cages, deport COVID-19 infected people back to nations at risk, reduce refugee admittance, tell asylum seekers to return at a later date…

This is not LOVE.

“We call upon all people of good will, but Catholics especially, to welcome the newcomers in their neighborhoods and schools, in their places of work and worship, with heartfelt hospitality, openness, and eagerness both to help and to learn from our brothers and sisters of whatever religion, ethnicity, or background.” (Welcoming the Stranger Among Us: Unity in Diversity, A Statement of the U.S. Catholic Bishops) Join Old St. Pat’s Immigrant and Refugee Rights Committee to learn how you can be God’s Love to the immigrant and refugees in our midst, our neighbors. (Contact: Kayla Jackson, OSP Liaison, kaylaj@oldstpats.org)
“’You shall love your neighbor as yourself.’ Love does no evil to the neighbor; hence, love is the fulfillment of the law.”  Rom 13:10

Immigrants and Refugees: A Faith Journey
Scripture connections for August 30, 2020

Myth: Immigrants are overrunning our country, and most are here illegally.
Fact: It is true that there are more immigrants living in the U.S. than ever before; however, the percentage of immigrants in the overall population is not much different than many other times throughout our history. Today immigrants make up
approximately 13.5% of the total U.S. population. This is approximately the same percentage as the same period in the
20th century (12-15%).

What are Peter’s successors binding on earth?  How is our Church being built?  In Pope Francis’ apostolic exhortation “Gaudete et Exsultate” [on the call to holiness in today’s world] (March 2018), he asks us to turn inward to our hearts and outward to our actions. He says:

Our defense of the innocent unborn, for example, needs to be clear, firm and passionate, for at stake is the dignity of a human life, which is always sacred and demands love for each person, regardless of his or her stage of development. Equally sacred, however, are the lives of the poor, those already born, the destitute, the abandoned and the underprivileged... We cannot uphold an ideal of holiness that would ignore injustice... We often hear it said that... the situation of migrants, for example, is a lesser issue. Some Catholics consider it a secondary issue compared to the ‘grave’ bioethical questions. That a politician looking for votes might say such a thing is understandable, but not a Christian, for whom the only proper attitude is to stand in the shoes of those brothers and sisters of ours who risk their lives to offer a future to their children. Can we not realize that this is exactly what Jesus demands of us, when he tells us that in welcoming the stranger we welcome him? (cf. Mt 25:35)
Immigrants and Refugees: A Faith Journey
Scripture connections for August 16, 2020

“She said, “Please, Lord, for even the dogs eat the scraps…” Mt 15:21-28
​
What compels the Canaanite woman to say this to Jesus? Faith - a belief that she was worthy of receiving God’s help. She knew deep down that her life deserved dignity. Isn’t that also the Faith of the immigrant and refugee? They know they are deserving of God’s help, of finding dignity in safety, in food, in work. And yet, our nation sets policies that deny this help and dignity to God’s people. Go to the US Conference of Catholic Bishops Justice for Immigrants website justiceforimmigrants.org/take-action/ and sign up for action alerts to make your voice heard. Speak up for the dignity of immigrants and refugees.
Immigrants and Refugees: A Faith Journey
Scripture connections for August 9, 2020

​In today’s 1st Reading, Elijah took shelter in a cave at Mt. Horeb, after walking for forty days and forty nights to get there.  Immigrants and refugees often travel even more difficult and dangerous roads, simply seeking safety and shelter: trying to escape the strong winds of oppression and poverty; taking flight after earthquakes, droughts and natural disasters destroy their homes and livelihoods; fleeing violence and persecution like fire… but God is not in the wind, nor the earthquake, nor the fire.  God is in “the tiny whispering sound after the fire” that stirs within our hearts, asking us how we will respond to the plight of our brothers and sisters...
Immigrants and Refugees: A Faith Journey
Scripture connections for August 2, 2020

“You who have no money, come, receive grain and eat; Come, without paying and without cost…”  Is 55:1

The immigrant and refugee hear God’s call to come. Come where you will find dignity in work, in food security, in safety. The US Conference of Catholic Bishops statement “Strangers No Longer” (USCCB, January 2003) states that people have the right to migrate to support themselves and their family: “When persons are unable to find work to support themselves and their families, they have a right to migrate to other countries and work…In the current condition of the world, in which global poverty is rampant and political unrest has resulted in wars and persecution, migrants who are forced to leave their homes out of necessity and seek only to survive and support their families must be given special consideration.”

It is also God’s call to us Christians to welcome them. As Jesus fed the thousands, so too must we trust that God will guide us in welcoming and feeding the immigrant and refugee. Do we do that as a disciple? Do we do that as a nation? Reflect on ways that you can learn more about the immigrant and refugee so you will echo God’s call to ‘come, receive grain and eat’.

Follow our weekly reflections on A Faith Journey to learn, grow and advocate for the immigrant and refugee in our midst.