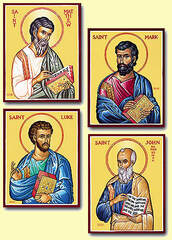 Have you ever found yourself watching a re-run to "Murder She Wrote" and realized, "I know who the murderer is!"?  Then you follow all the correct clues and are not misled by 'red herrings'. Well, in this four-week brief introduction to the Gospels, we are going start from the back, from the conclusions of each Gospel (one surprisingly seems to have two conclusions, another, in the view of many scholars, has none). The conclusion of the Gospel, like the conclusion of an episode of "Murder She Wrote" is about identity. Each Gospel is seeking to answer the question Jesus himself asked: "Who do you say that I am?"  But it also reveals another identity: "Who are you that is reading this writing?" We will proceed in reverse chronological order, beginning with John and ending with Mark. Please join us.​
Click here to sign up!
The next Zoom link will be emailed to you on Monday, July 27 at 2 pm.
​
Fr. William O'Shea was on the staff of the Chicago Summer Biblical Institutes from 1960 to 1973. He taught an introductory course in Sacred Scripture in the late 60's at Rosary College (now Dominican University) and also taught for more than ten years in the Archdiocese of Chicago's formation program for the Permanent Diaconate.